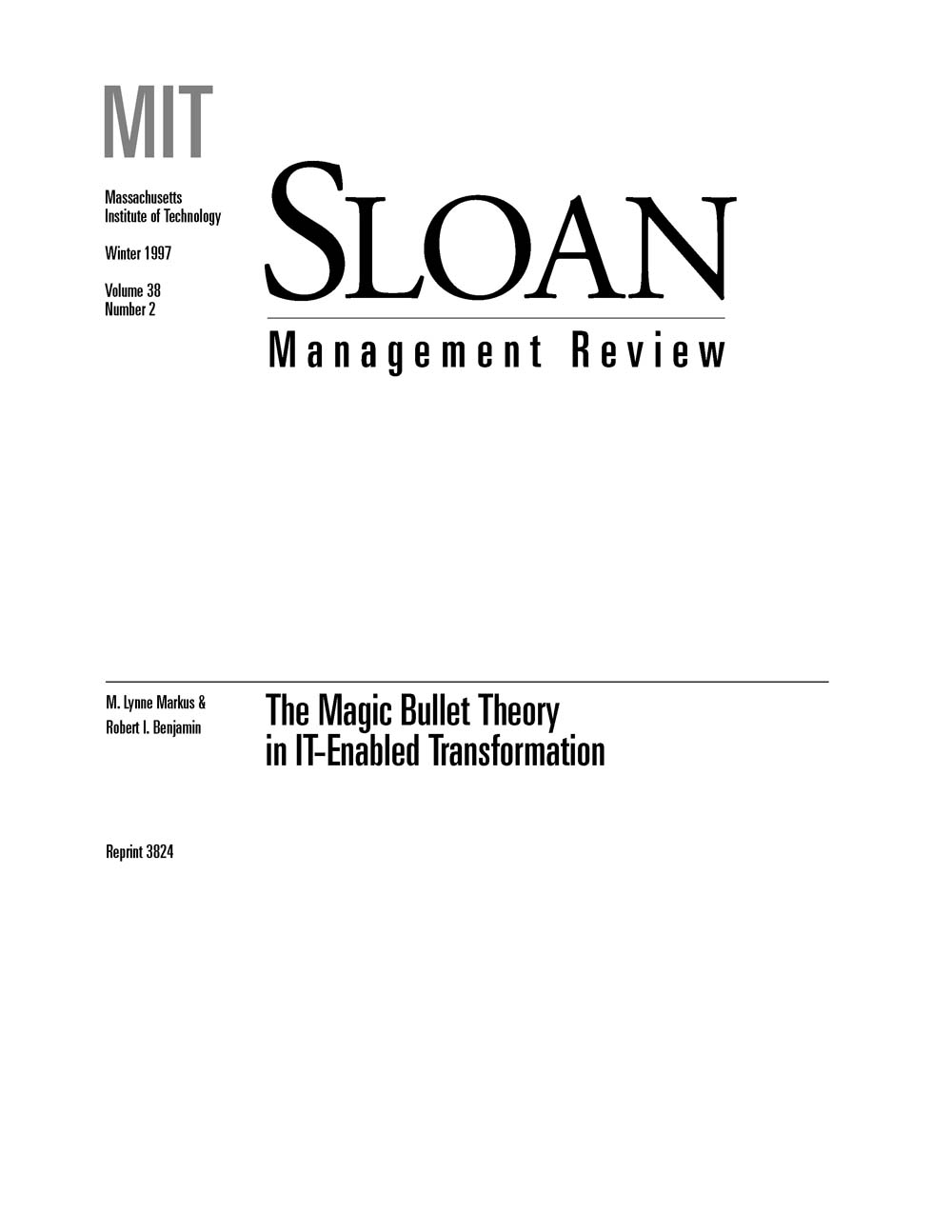 Why do so many IT change management projects result in failure? According to Markus and Benjamin, people stay in their prescribed roles as line executives, IS specialists, and so on, with little cross-functional cooperation. People see IT as magic that can prevent them from working in old, unproductive ways. In the "magic bullet theory," there is no assigned change agent; people assume that the gun fires itself. Well-built IT makes it easier for users to work more effectively, according to the authors, but it cannot ensure that users will use it as intended.

A change agent must bring together all the conditions necessary for change. Markus and Benjamin suggest that, because agents must change people's minds about IT, they frequently distance themselves from helping people to change by focusing on the power of IT rather than the reason for the change. This leads to a lack of discussion in the organization. Real issues are never confronted or resolved, which also allows users to blame the technology itself for failure rather than the change idea. And with a lack of cross-functional cooperation, line executives and IT specialists may join in resisting IT change that seems to serve different stakeholders.

Markus and Benjamin examine two alternative roles for the change agent. They base the IT change facilitator model on that of an organizational development practitioner. Facilitators believe that people, not technologies, create change. They seek to bring together sound ideas, well-built IT, and organizational conditions to enable change. They seek to ensure that all people -- technologists, entrepreneurs, and users -- are empowered about IT. They remain neutral and create trust and mutual respect among functions. Companies may need to hire outside consultants to play this role, but executives and IT specialists may also be able to act as facilitators.

IT change advocates focus less on empowerment and more on inspiring people to adopt a change. Rather than remaining neutral, they use any tactic to convert people -- persuasion, manipulation, communication, even "water torture" (constant but varied repetition). They know clearly what their organizations must do to use IT effectively and show people what kinds of IT they want and need. According to the authors, there are effective change advocates anywhere in an organization; they are not necessarily top managers but may be line managers or IT specialists.

As a substitute for the magic bullet theory, the authors offer the metaphor of the Trojan horse, a highly coordinated effort by Greek warriors to breach the walls of Troy. Every warrior, no matter what his role, had to plan, execute, improvise, and share responsibility for the horse. In IT-enabled transformation, change is everyone's first priority; line managers, IT specialists, and other organizational members must all practice the change agent role.